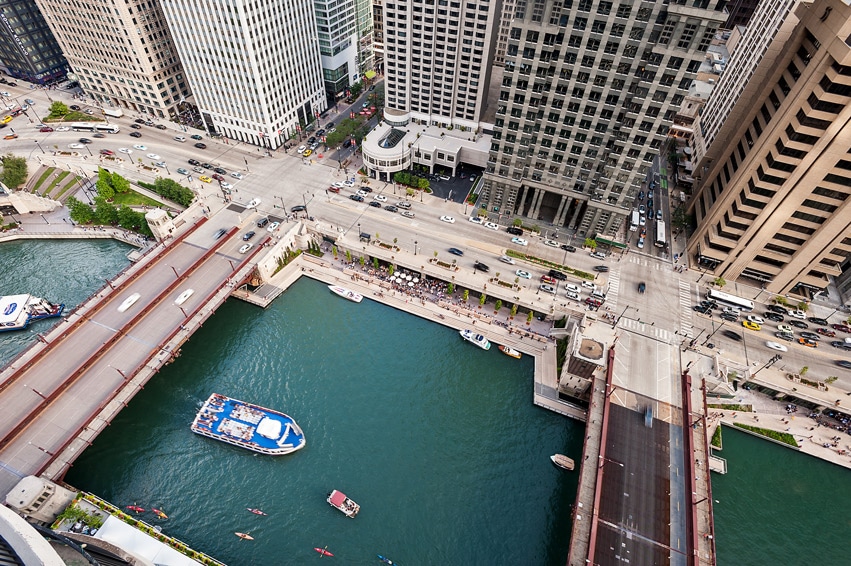 In Chicago, the new Maggie Daley Park and Chicago Riverwalk exemplify the trend for cities to build high-profile works of landscape architecture to spur reinvestment in historic urban cores. In this era of decreased federal and municipal funding for such projects, private investment is increasingly called upon. As a result, and as a range of new spaces in Chicago demonstrate, the landscape architect has emerged as a mediator between commercial interests and civic responsibilities.

High-profile landscape architecture projects are by now obligatory tools for American municipal governments seeking to attract investment dollars and jobs. The narrative of outmoded infrastructure or former industrial land turned park is by now well established and the discipline of landscape architecture has emerged as a leader in their design. Catalyzed by these new public spaces, American downtowns and nearby neighborhoods are experiencing what the popular press and scholars alike herald as a “return to the city” or an “urban renaissance.”

But whose renaissance is it? Who is returning? It is urgent to frame these spaces historically and geographically to take stock of the effects recent works are having on the spatial, social, and ecological dimensions of American cities. Reframing the urban as a multi-scalar process producing historically specific moments of urbanization, not just a politically bounded aggregation of individual objects, helps productively complicate this popular narrative.

The Right to Open Space

Chicago typifies the aforementioned changes. However, when considered against the backdrop of the city’s civic-minded 19th- and 20th-century public open space and infrastructure projects, its recent landscape transformations beg questions regarding agency, equity, and design. From the city’s very inception, Chicago’s citizens and civic leaders demonstrated a precocious awareness of the value of open space. On an 1839 map drawn up by Canal Commissioners, a portion of the Lake Michigan lakefront was set aside as open space and labeled “Public ground forever to remain vacant of buildings.”

It eventually became Grant Park and its status as an open and free space is protected by law. Likewise, an ethos of publicness pervades Burnham and Bennett’s 1909 Plan of Chicago, which to this day has an astonishing influence on local planning and design decisions.

With its legacy of equitable open space and strong record of consistently building infrastructure, parkland, and architecture of significance, the latest era of Chicago parks is a locally specific version of national trends. […]