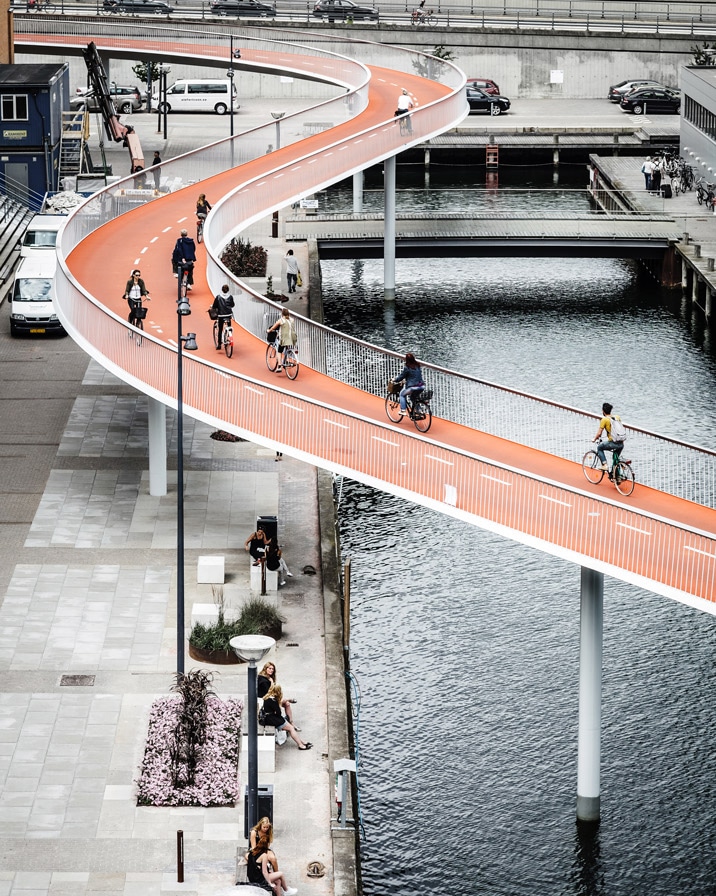 Copenhagen has a new piece of bicycle infrastructure. The so-called “Cykelslangen”, the “Bicycle Snake”, is a cycle superhighway that increases the ease and efficiency of daily commutes in the city. It not only marks another step in Copenhagen’s vision of becoming an eco-metropolis, it also allows a glimpse into the complex structure of a modern city. 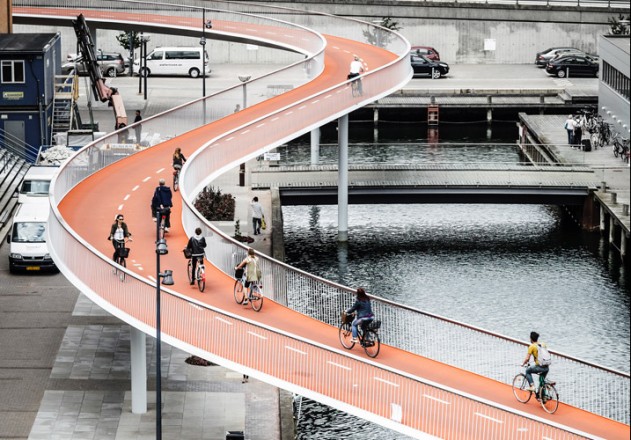 The Bicycle Snake is heavily used day and night and evokes a freedom of speed for the cyclists. It also allows a glimpse into the various characteristics of Copenhagen. 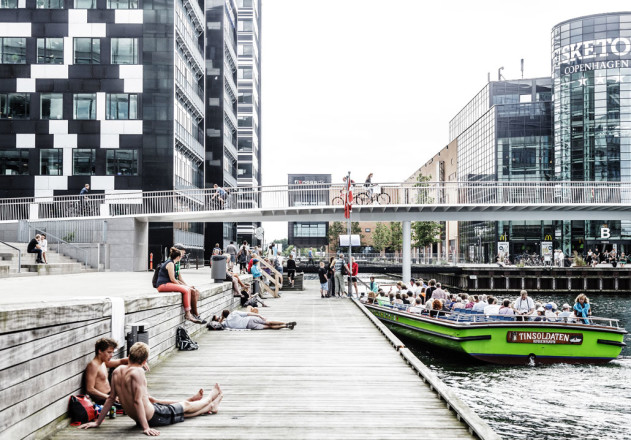 The new infrastructure has replaced what used to be an bicycle trek down two flights of stairs, followed by a slow, cautious ride through crowded pedestrian plazas. 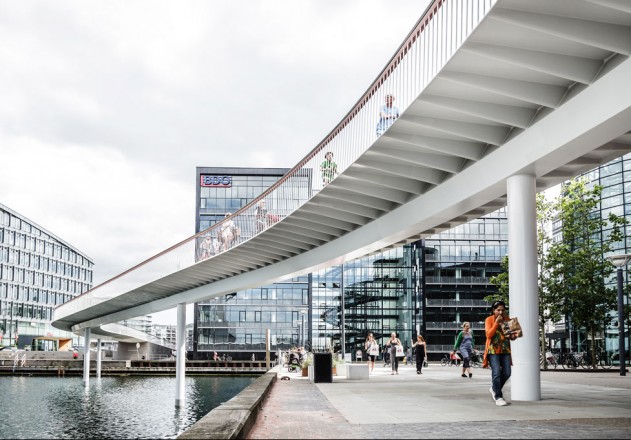 Copenhagen is defined by its bicycle culture and high quality of life. Photos: Rasmus Hjortshoj

Situated between a clumsy urban mall and a sleek hotel, sweeping from a highway overpass down to the harbor front, is one of Copenhagen’s latest infrastructural gems, epitomizing an ease and efficiency of everyday urban life. The striking and heavily hyped Copenhagen Cykelslangen, the “Bicycle Snake” delivers cyclists along a 280-meter-long bicycle bridge – or extended ramp – from a first-story-level, heavily-trafficked highway overpass to the ground-level, car-free harbor front.

Elevated 5.5 meters above ground level at its highest point, and resting on elegant, evenly spaced white pilotis, the Bicycle Snake has replaced what used to be an uncomfortable bicycle trek down two flights of stairs, followed by a slow, cautious ride through crowded pedestrian plazas. Now, in less than one minute, cyclists glide along the gentle curvature of the striking orange-covered cycle bridge between buildings and over water to the harbor.

The Bicycle Snake is heavily used day and night, and cultivates a human dimension in an otherwise awkward and soulless configuration of looming concrete and glass structures along Copenhagen’s harbor front. The vision of Danish urbanist Jan Gehl of multi-use, human-scale “life between buildings” is performed almost perfectly on the Bicycle Snake, as cyclists are channeled effortlessly into a pedestrian plaza with room for movement, sitting, and the opportunity to be watched both from above and below.

The Bicycle Snake also lives up to Copenhagen’s green-city vision, proving that the city actually could deliver on its promise to be carbon-free by 2025. This vision has since become an internationally renowned green-city brand, as Copenhagen has been named the European Green Capital (2014) and the world’s most livable city by Monocle (2014). One delightful ride down the Bicycle Snake authenticates that this green-city brand lives on in the space between buildings.

With the Bicycle Snake, Copenhagen – one of the world’s best bicycle cities – has delivered a highly functional and aesthetically pleasing piece of bicycle infrastructure that elevates its cyclists above ground-level traffic to increase the ease and efficiency of their daily commutes in the city. In this regard, the Bicycle Snake is in line with the city of Copenhagen’s vision to become an eco-metropolis, or a city of cyclists for cyclists. Copenhagen ambitiously aimed to have 50 percent of all citizens commute by bike by 2015, with 90 percent of all cyclists perceiving a sense of safety while cycling.

Although the actual number of commuters on bicycle is still lower than the city would like (37 percent, at last count), Copenhagen has achieved what many cities never will by providing cyclists with their own infrastructural grid of strictly separated bicycle lanes and paths, ensuring a high degree of safety and speediness. With the current developing network of so-called supercykelstier – “cycle superhighways” – moreover, the city and the surrounding municipalities are trying to make the bicycle become a real alternative to carbon-heavy, everyday means of transportation, even on longer distances.

Riding along a cycle superhighway connecting the city center with the surrounding suburbs up to 20 kilometers outside the city, many of the obstacles that contribute to making the bicycle ride a slow, laborious and potentially unsafe form of transportation in urban areas have been eliminated. Instead, cyclists are offered the possibility to move swiftly, safely, and independently of the general congestion along “green routes” of often picturesque quality.

Apart from cultivating a vision of a carbon-neutral daily-commuter culture in dense urban areas, and while the potential health benefits for the individual are to be taken seriously, the cycle superhighways place cyclists in a curiously autonomous space of solitary bike travel. Earphones plugged in, swooshing towards the city center at high speed, the cycle superhighways provide an extreme liberation of the cyclist from the messy mélange of everyday urban traffic situations. […]